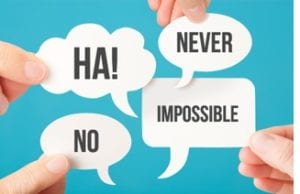 24 Nov Why the Naysayers are Wrong About Computerised Adaptive Testing

Posted at 03:29h in Assessment by Talegent team 0 Comments

Computerised Adaptive Testing (CAT), is the latest technology innovation for improving talent assessment. Unlike traditional testing, CAT adapts the test to the test-takers. Traditional tests need to have questions with a range of difficulty so that they can fairly test candidates of all abilities. Unfortunately, this means that candidates in the high or low ranges are likely to be asked questions which are far too hard or far too easy for them. CAT solves this problem by adapting the questions asked based on candidate’s previous answers.  For example, if a candidate answers the first few questions correctly, CAT will be able to surmise that they’re on the higher end of ability, and jump straight into the meat of the test – asking the hard questions where they can show how smart they really are. Ultimately, this means that tests can be made shorter, harder to cheat, and less frustrating.

However, as with any new technology, CAT has its critics. Here are 3 of the most common attacks made against CAT – and why they’re unfounded: